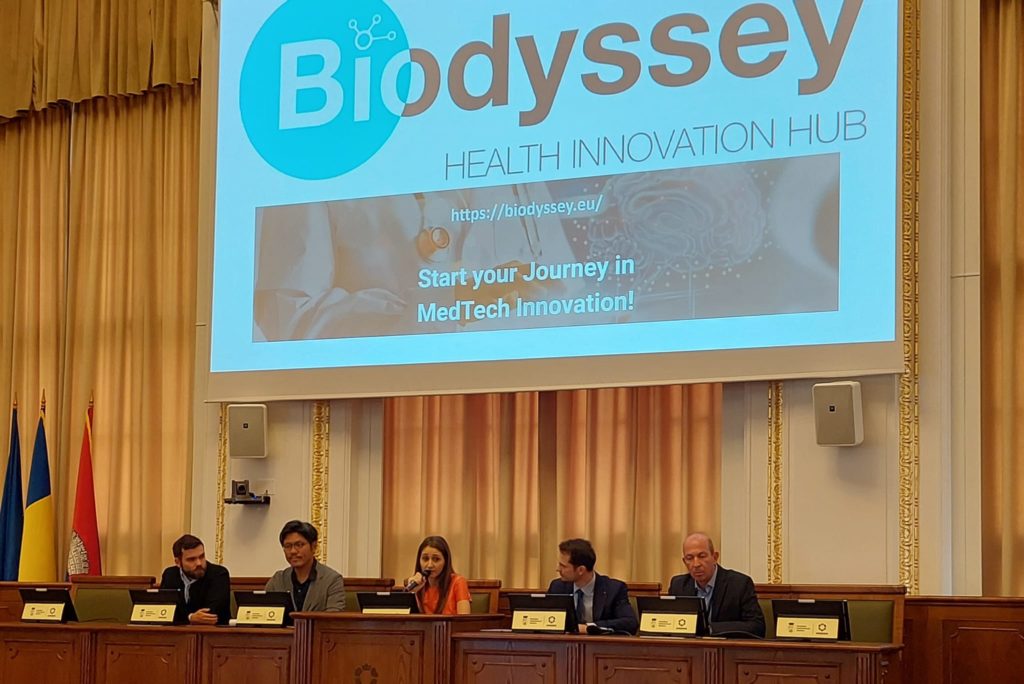 Romania will have, for the first time, a medical technology innovation hub, founded by experts in the field from the Technion University in Israel and Stanford University and with the support of the Romanian-American Foundation, which will offer high performance educational programs to build start-ups from idea identification to implementation. The announcement was made at the SSIMA Re:Imagine Healthcare International Medical Technology Conference, the largest healthcare technology event in Eastern Europe, taking place September 5-9 in Oradea.

BIOdyssey is particularly targeting young people who want to develop a business in the medtech field and need support both educationally and, at a later stage, financially, through two programmes it will make available to them. In the first phase – Germination – participants in the programme will have access to the methodology taught at Technion University for over ten years, which has created dozens of successful start-ups in Israel every year. The famous industrial designer Ezri Tarazi, director of T-hub, the Israeli university’s innovation programme (from which the Moovit startup was born), will be involved in the health innovation programme launched in Romania. Participants will also take part in workshops led by specialists with different expertise – engineers, doctors, entrepreneurs – from Israel, the US (Stanford University) and Japan.

In the first phase, young people with the greatest potential will be identified, while in the second phase, called Acceleration, their projects will be supported to be effectively transformed into businesses.

“Based on the methodology, participants in the hub will be encouraged to identify a real problem in the Romanian healthcare system, impacting on everyone’s lives, and to propose a technical solution. They will have five months to work with the mentors included in the programme to implement their proposed solution. Not everyone who comes out of this hub will launch a start-up right away, but they will learn the steps to do so,” explained Dr Elena Ovreiu, founder and organiser of the SSIMA RE:Imagine Healthcare Conference.

The BIOdyssey Hub will start its activities in October, first in Bucharest as a pilot programme, and will be extended to the rest of the country.

“We want to set up the largest innovation hub in Eastern Europe. Romania, with the brilliant students it produces, has huge potential in this field, which we absolutely must develop and exploit. I believe that, thanks to BIOdyssey, we will see the birth of the next Romanian unicorn. But for this we must not miss the chance to train talented people capable of innovating the medical system for the benefit of all”, added Elena Ovreiu.

The project is also supported by the Ministry of Research, Innovation and Digitisation, which has committed to identifying the necessary sources of funding from the budget, European funds and the National Recovery and Resilience Plan (PNRR). In addition, the authorities promise to amend the legislation for innovative start-ups, a process that takes into account models already existing in countries such as the Netherlands and Ireland, with a strong entrepreneurial tradition.

“The state should make a clear distinction between start-ups. At present, the 32-year-old legislation applies to a start-up on innovation and technology in the same way as it does to a venture. Different rules should be imposed for a person who wants to open a hairdresser on the corner of the block and a young person who has created an app, because technology, IT, medicine, education should be priority areas,” said Sebastian Burduja, Minister of Research, Innovation and Digitisation, who attended the launch event in Oradea.

Discussions on amending the legislation in this area will take at least half a year.

“We will determine what changes are needed. For example, we can create levers so that employees of a start-up have the option to become shareholders in the company, a mechanism already common in the West, because a start-up company does not have the money to motivate its employees enough, so that by becoming shareholders, they will be co-interested in developing the company. This is provided for in the tax code, but the enforcement mechanism is very cumbersome and needs to be changed,” added the Minister of Research.

The SSIMA Re:Imagine Healthcare International Medical Technology Conference, now in its 6th edition, is organised by the International School of Imaging with Applications in Medicine (SSIMA), in partnership with the City of Oradea and the Oradea County Emergency Hospital, and is held under the High Patronage of the President of Romania and under the auspices of the most prestigious professional society in this field, The Medical Image Computing and Computer Assisted Intervention Society (MICCAI).

Massachusetts Legislation To Curb Use Of Step…